An accessible and convenient restaurant to get to in Lake Tekapo is Mackenzies, with great location (in the city center), long operating hours, and lots of parking space. The restaurant had an excellent view of the lake and mountain, a warm and comfortable interior, but I thought the food was average and prices were too expensive. Nevertheless, Mackenzies is a place you can go to for various occasions, be it for a date, drinks, a meal with a friends or family, or if you just want to find a clean and comfortable environment with decent food.

END_OF_DOCUMENT_TOKEN_TO_BE_REPLACED

Squisito Bar is located inside QV, which is at the heart of the CBD and easily accessible, and situated behind Schnitz. I assumed that since the mall is normally bustling with people, the restaurant would be very crowded and noisy as well, but it turned out to be relaxing and peaceful instead. I was very impressed with the quality and price of the dishes here – the food are delicious yet reasonably-priced, if not lower compared to other places. Customers can make online reservations as well on the restaurant’s website, to avoid having to wait in line.

END_OF_DOCUMENT_TOKEN_TO_BE_REPLACED 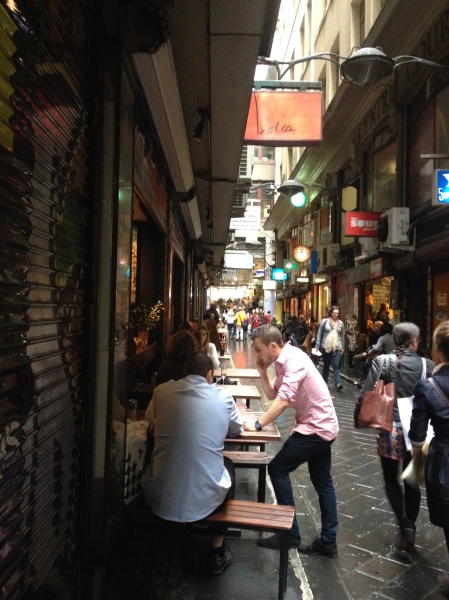 Ever since I came to Melbourne, I’ve been so lucky to have my sister take me to different restaurants that she’s been to and introduce me to so many delicious food. One of the first few places she took me to was Lorca, a Spanish cafe located in the Diagon Alley-esque alleyway at Centre Place. Seriously, that place looks like it came out of the Harry Potter books, or at least how we imagined it to be. An array of restaurants and cafes are lined up on both sides, and each one of them looks so distinct and unique. Centre Place is also very close to the Flinder’s Street Station, and in the heart of the city, which is usually always bustling with people.

Lorca’s definitely one of the places I’d suggest people to try, and it’s officially my current favorite Spanish restaurant/cafe, though I can’t see the throne being challenged anytime in the near future. The food there is great, the atmosphere’s lovely, the staff are nice… what’s not to love? On a side note, Lorca appeared in Running Man, a popular South Korean variety TV show! END_OF_DOCUMENT_TOKEN_TO_BE_REPLACED

I never thought I would have to post this…ever. Today, I wrote a letter to Porto Restaurant. It went like this:

Dear Porto, Chef Eric, and To Whom Ever Else It May Concern,
I’d like to first thank you for your kind attention and for spending some time reading this e-mail. I’ll make this as short and as concise as I can.
I’m a regular customer and a huge fan of your food and restaurant, that is, until today. I was always happy when I dine at your restaurant that I even blogged about it: https://cartolinagourmet.com/2014/04/15/bandung-porto/
I’ve never been to Porto for breakfast so this morning, I went with a friend. Upon entering, even though it was unexpectedly crowded with many young children and their parents, I was still happy to be there because of what I imagined would be excellent food that’s waiting for me. Unlike my friend, I didn’t want anything too filling. I remembered about 2 months ago, my sister ordered Potato Cheddar Soup and we were both extremely impressed with it. I was never a soup enthusiast but your Potato Cheddar Soup then converted me. So today, I decided to order that same soup.
However, I cannot tell you how immensely disappointed I was when the soup came. First thought that came to mind was: this must be a mistake (my friend immediately laughed looking at the soup I was served with). I did not expect to be served with what seemed to be 3-4 spoonfuls of soup and paying Rp 29000 for it. I annoyed your waiter/manager and waitress that day. I asked one of your waitresses if there was a mistake in the portion. She replied “the portion has always been like that”. Has she only started working for Porto since 2 months ago? (Be careful of customers that know more than you think they do. Lying does not do any good). I was very unsatisfied with the response she made. So I asked a waiter (maybe he was a manager because he looked the part) and he at first gave me the same reply as the waitress: the portion has always been like that. And immediately I told him “No it has never been like that, because I’ve ordered it before and it was definitely not like that.” He said he would help me check with the chef and see what he could do. I was more happy with that so I waited patiently. After a while, he came back to me and said “the portion was changed a month ago” to which I immediately replied “but the price stays the same…?” I became a fussy customer and explained that I have never been served with such a measly portion of soup anywhere I’ve been to. My sister was served a decent and regular amount of soup, and that was probably about more than double the portion I was served today (I remember we commented on how huge the potato was). No matter how good the soup could have been, I could not make myself pay Rp 29000 for that amount. It was way too gourmet-sized for me. So I requested for another soup and have the pathetic looking Potato Cheddar Soup in front of me be taken away. Attached is a picture I took today. Look at the potato and compare it to the size of the spoon. Are you really serving that?
I just could not stop wondering to myself “how could they reduce the amount so drastically and the price stays the same?”. If Porto still exists in 10 years and the inflation rate has somehow rocketed 100%, maybe I wouldn’t make so much noise then. But it has only been 2 months since that particular life-changing Potato Cheddar Soup and I simply could not keep quiet when Porto served me that miserable soup. So I apologise for that.
I commend your service and the waiter/manager that helped me this morning, for being patient and understanding. Thank you for the free soup, but I hope that something is done about it. I don’t see a point in continuously disappointing customers and compensating them with a free soup all the time. I’d rather be back to Porto without having to worry about the portion of food you are serving. I believe Chef Eric and the rest of the team share the same passion for food as I do. I may not be a chef nor do I have a restaurant, but when I cook for my family and they give the thumbs up, my happiness is double the happiness they feel while eating the food I have cooked for them.
I said in my blog “we feel that every dish has been made with extra care and so much thought has been put into producing it.”  Obviously this time, that did not happen at all. So, I hope you take some action and take that back. Otherwise, you have yourself one less loyal customer.
Yours sincerely,
W

I deliberately placed the soup spoon beside it for comparison in size. I didn’t even drink a single drop out of it (I used the spoon to take a spoonful and see how much would be left if I drank that amount of soup. Conclusion: maybe about 3 more spoonfuls and poof! No more). It was too ridiculous to be ignored. However, I really do hope that I would get to post a positive update soon.

We love, love, love this place. Just can’t get enough of it. One of the many reasons why we’re so fond of Porto is that they have a special menu that they change every once in several months so that you can try something new every once in a while. They have a main menu (with lots of choices) that they don’t change, and they’ve got a separate special menu that is based on different countries. As of now, that menu is based on Greek cuisine (they’ve had Italian and Czech once as well). Moreover, we feel that every dish has been made with extra care and so much thought has been put into producing it. Bottom line: this restaurant is a MUST go. END_OF_DOCUMENT_TOKEN_TO_BE_REPLACED

Before coming to Melbourne, I’ve rarely tried European food in my life. But one of the first restaurants I was introduced to when I got here was Stalactites, a Greek restaurant situated in the Greek Precinct in the CBD and across from QV. I’ve grown to love Greek food since then, and it has become one of the restaurants that I’d suggest eating at with my friends when we’re out of ideas as to where and what to eat. Its location is fantastic and beware of huge crowds. I recently went to Stalactites for dinner with some friends and there was a long queue outside, which usually happens during meal times, but we didn’t expect that for a Wednesday night too! Another thing, Stalactites is open 24/7 (good news for nocturnals!) and it also offers a large variety of dishes. END_OF_DOCUMENT_TOKEN_TO_BE_REPLACED